Emmy Time
The Circle of Life

When I won free tickets to the Transiberian Orchestra Concert I didn't even consider that it was on the same night as the 2008 Mid-South Emmy Nominations would be announced.

And even as I walked into the Greensboro Coliseum this past Friday it didn't cross my mind to think about the impending announcment for which I had 4 entries. 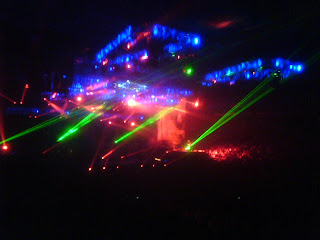 But as I sat looking around the coliseum at the seats, the ads and the cupholders(with their ads), I flashed back to my first Emmy Win....shot right about where I was sitting as workers prepped the building for the NCAA tournament.

That story won me and Eric White our first Emmy...and as I flashed back to reality...I thought out loud (to my wife) how cool would it be to get a phone call from a co-worker that I'm nominated for an Emmy while sitting in the coliseum. It's like a big circle in life.

Not even halfway through the concert I missed a call from a number I was unsure of but I checked the Voicemail to hear a giddy Julie Luck congratulating me for our Emmy Nomination for our series "13 and Pregnant" about a 13 year old couple in Thomasville who concieved, birthed, and are now taking care of a baby. (with adult supervision of course!)

I was happy and I enjoyed the rest of the concert having the knowledge that I've now been Emmy Nominated four years in a row.

When I got home later that night I saw that I was also nominated with Melissa "Deal or Dud Lady" Painter for our Deal or Dud segments.

My Station, WGHP, also recieved a nomination for Continuing Coverage in 24 hours of the May 5 Tornados in Greensboro and Clemmons.

Fellow Photojournalist Brad Ingram is nominated in Photography and Editing.

Congrats to Brad for his work and all my co-workers for their efforts on that long day in May.

Also, Congrats to everyone who's nominated(especially if you're reading this), because I know how hard we all work to produce the work this good.

Now, if you'll excuse me, I have to plan a trip to Nashville in late January!
Posted by Unknown at 11:23 PM

damn dood, you're on fire. congrats.

Good Job Chris even though you didn't bring another home. We were proud of you. Hope you had a good time.