We arrived in Nasvhille on Friday Afternoon. After checking in we proceeded to our room on the 22nd floor of the Renaissance Hotel. I love the view. This the highest up I've ever stayed. 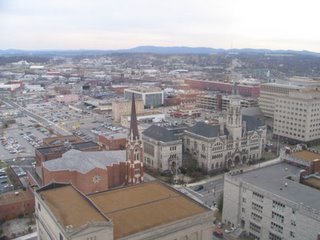 This is the view from the elevators. That building to the right, we are calling the Batman Building. It sit's omnisciently over the bars and saloons of Broadway staring down on all that is Nashville's nightlight. More about that, and Karaoke, later. 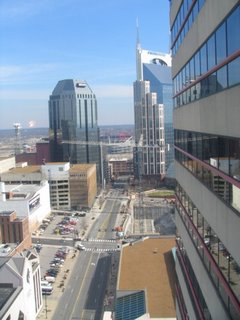 It's almost time for the Emmy Awards cremonies to begin. 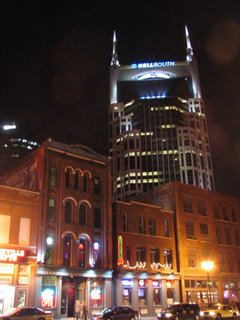 This is the view of the 'Batman' Building from Broadway taken Friday night.

Did I mention Karaoke? Later.

It's time to head downstairs for cocktails and the Pre-party.
Posted by Unknown at 5:30 PM

I remember when the BellSouth (Batman) building was built. We always call it the same thing. Nashville's a great city, hope you and Bob had a chance to get out and explore.