I've never been to the great western gambling town of Las Vegas, so last April when the dates for NAB were approaching Lenslinger and I thought out loud about heading west. It was too late to make a serious effort at organizing the cross country jaunt and honestly, I didn't have the money. But it wasn't too late to plan for 2006.

So in 2005 while both of us sat here in in North Carolina fantisizing about attending the ultimate TV trade show in the ultimate trade show city, we had to sit back and watch another TV Photog Blogger, Little Lost Robot, publish his memoirs of the trip in type and awesome video shorts, whetting our appetites even more. 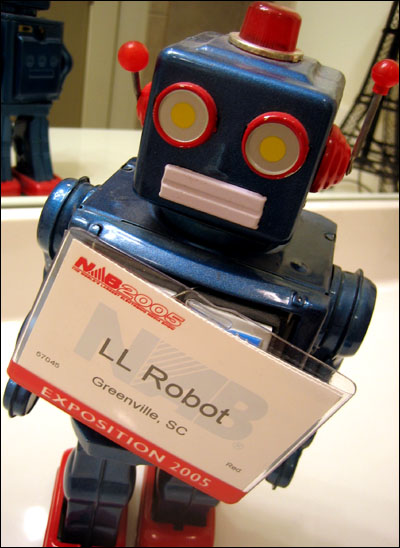 While watching LLR blog, and vlog from Vegas we let him know our intentions for a year later through our comments.....


Lenslinger said...
I'm jealous LLR, and am hoping to go next year. Until then, I'll be attending vicariously through you. Just don't get us arrested or anything...
4:34 PM

So now it's a year later...the trip is booked...and the countdown is on....(SEE COUNTDOWN AT TOP OF PAGE)

You can live off of parties and receptions, if you don't mind missing sleep. If you plan it right, you won't pay for a meal or drink between Sunday night and Thursday night.

As for looking at all the newest toys - Apple, Avid and Sony boothes are enourmous in size and the crowds are overwhelming. The key is to look for the little guys with the great ideas (like last year's Firewire Drive).

Dude, you are going to have soooo much fun! When I worked in Vegas, every year we would think up a reason to go cover NAB! hehe