Anything can happen on live TV, so it's no surprise when something does go awry in the middle of one of our daily Live Reports.

But these days with my handy dandy XDCam, I can be ready for the unexpected. This state of the art camera has a built in Cashe or RAM Buffer which is sort of like TIVO or DVR. When the Cashe is active it's always recording. It stores a 12 second loop of video in the internal memory and if anything happens in view of the lens, I can punch the record button to save that 12 seconds and begin recording live video. This makes the camera a photogs DREAM.

It is, however, with great regret and a slight grin, that I didn't have my high tech toy with me this morning when

the Live Shot I was doing went south.

I don't really know where my camera was. As a matter of fact the camera I was using was a very cheap, almost handycam version of a broadcast apparatus that I had never ever even laid eyes on.

The shot was a routine live shot on a courthouse square in a small town. Could have been just about anytown in the south. As our time slot for the live insert approached, I was busy tweaking technical matters, but the sound of tires squealing and engines revving caught my ear, and I knew I wasn't in an episode of the Dukes of Hazzard.

Shots rang out just as I caught the glimpse of a fast moving sedan, circa 1975. It was dark and low, and the barrell of the shotgun poking out the side window said to me, "Chris you better run!"

It was every photographers worst nightmare and probably dreamed by every lens toting journeyman too. I listened to the side window shooting iron and took off in a sprint....toward my borrowed camera. I grabbed my piece and ran for cover.

I knew I'd be the hero if I could get the money shot. Video of a drive by in a small town at a courthouse...Now that would go National!!!

I worked my way around the backside of the large historic building hoping to get set for the speeding villans as they rounded the square. I found cover and steadied the camera on my shoulder the best I could just in time to see the sideways sliding sedan burn rubber out of town while popping off a few more rounds. 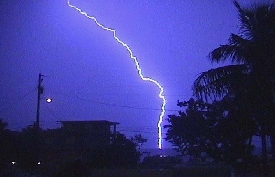 
The thunder clap from a BOLT OF LIGHTENING instantanious and close. I was now wide awake from this crazy dream, now trapped in a bearhug from mythe wife.

The earsplitting result of a bolt that must have struck withing feet of my bedroom window had perfect timing to scare my ass out of one hell of a dream.